How You Can More Accurately Predict the Future of Design, Using Steve Jobs’ “Lost Speech” from 1983 as an Example A 28-year-old Jobs was eerily prescient. The key is to focus on certain fundamental nodes of progress

I saw this article on Core 77 and wanted to keep it for posterity sake.

I’m currently researching the potential of predicting the impact of future technologies. Hearing of this, a friend told me “You should listen to that 1983 Steve Jobs speech.”

“About what?” I asked. Jobs gave a lot of speeches in the early 1980s, and I wondered how that would be helpful.

“The one where he predicted the iPad,” he said.

Okay, he got my attention.

My friend was referring to what is known as the “Lost Steve Jobs speech.” In 1983 Jobs delivered a talk to a group of designers at the International Design Conference in Aspen (IDCA). And this speech, at least in its entirety, was indeed “lost” until blogger Marcel Brown received a cassette tape titled, “The Future Is Not What it Used to Be” from a colleague John Celuch of Inland Design. Celuch attended the talk that day 36 years ago and possessed a recording of it. At a time when most of the world were unaware of computers, never mind owning one, Jobs laid out a vision that described the World Wide Web, the iPad, the App Store, Siri, even Google Street View. 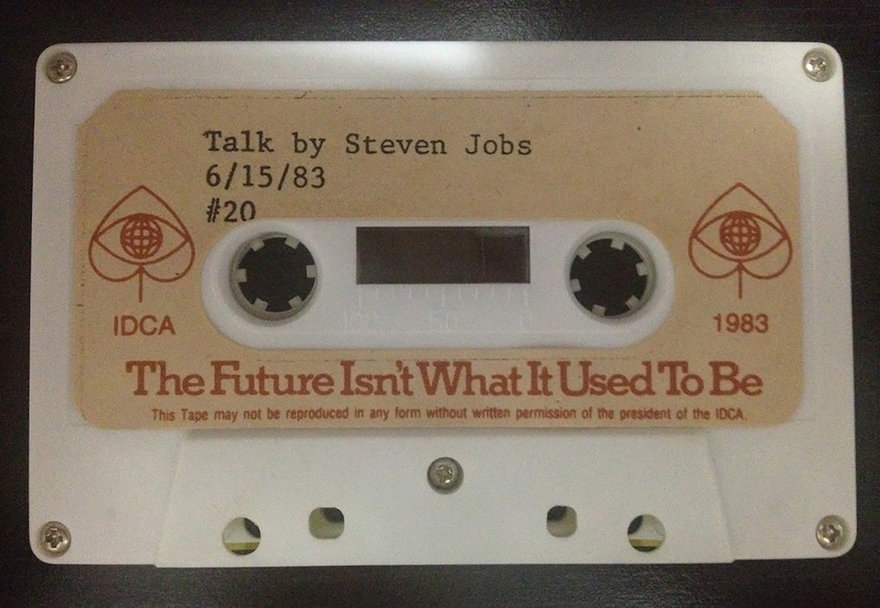 Before diving into this, some context is necessary: At that time IBM and Apple were head-to-head competitors to have the most popular personal computer, and the Macintosh had not yet launched. The idea of networked computing in the home was far from mainstream; the Web as we know it was still seven years away. And yet the 28-year old Jobs already had a vision for the future that was eerily clear and in retrospect, accurate.

“Ultimately computers are going to be a tool for communication,” is the strongest thread running through his Aspen talk. And Jobs predicted that the standards for using computers to communicate would continuously evolve. Recall this was long before any mainstream computer networking—or mass use of the Internet—and yet he described how email would transform the way we communicate. Jobs went beyond understanding that computing would transform knowledge sharing; he understood that it would become seamlessly entwined with human social behavior. He described distribution lists that would later become bulletin boards, signaling the future of social media. “They hooked a hundred computers together on a ‘local area network,’ which is just a cable that carries all this information back and forth. And, an interesting thing happened…there were 20 people, and they were interested in volleyball, so a volleyball distribution list evolved. And when a volleyball game was changed, you’d write a quick memo and send it to the volleyball distribution list. And then there was a Chinese food cooking list. And before long there were more lists than people. I think that’s exactly what’s going to happen. As we start to tie these things together they are going to facilitate communication and facilitate bringing people together and the special interests that they have.”

The story of all technology revolves around three basic plots: Saving time, amplifying resources and optimizing exchange. These inspire the direction of progress and in understanding that, Jobs could see what he may have thought to be inevitable advancements. Even 36 years ago, Jobs’ vision was to provide consumers with the ability to do pursue all three plots. And to accomplish that, he made computing easy for the masses through two key qualities: Mobility and clarity. Apple strove for small, lightweight and beautifully easy machines. As Jobs noted repeatedly in the Aspen talk: “The way we’re running the company, the product design, the advertising, it all comes down to this: Let’s make it simple. Really simple.” (Some say the latter inspiration initially came from Jobs’ night shift at Atari, where they had to make the game instructions super clear–for stoned college students.)

Though his audience was relatively small in Aspen, he pleaded for the designers in the room to think about the future—and turn their attention away from then-sexier design fields, and towards computers instead. “If you look at computers they look like garbage. All the great product designers are off designing automobiles or…buildings. But, hardly any of them are designing computers. By 1986 we’re going to ship more computers than automobiles in this country,” Jobs told them. “People are going to suck this stuff up and we have a shot to put a great object there…and if we don’t, we’re going to put another piece of junk object there.”

He also spoke about fonts, as he so famously often did, and the importance of a user-friendly interface—knowing that the GUI was critical to engaging the masses. As Jobs’ biographer Walter Isaacson wrote in Smithsonian Magazine, “In an era not known for great industrial designers, Jobs’ partnerships with [founder of Frog Design] Hartmut Esslinger in the 1980s and then with Jony Ive starting in 1997 created an engineering and design aesthetic that set Apple apart from other technology companies and ultimately helped make it the most valuable company in the world.”

Later in the talk Jobs literally outlined the vision for the iPad: “What we want to do is we want to put an incredibly great computer in a book that you can carry around with you and learn how to use in 20 minutes. And we really want to do it with a radio link in it so you don’t have to hook up to anything and you’re in communication with all of these databases and other computers…. One of these days…you’ll be walking around Aspen and [retrieve your messages].” Jobs noted this was at that time impossible technically but that he would still work towards it. “So we had 3 options. One was to do nothing and as I mentioned, we’re all pretty young and impatient so that was not a good option. The second one was to put a piece of garbage computer in a book and we can do that, but our competitors are doing that, so we don’t need to do that. The third option was to design the computer that we want to put into the book eventually, even though we can’t put it into the book now. And right now it fits in a bread box, and its $10,000 and it’s called Lisa.”

Related to mobility, Jobs recognized the inefficiency of delivering software on disks distributed through retailers and told his audience: “When you want to buy a piece of software…we’ll send tones over the phone to transmit directly from computer to computer.” This was the idea for the App Store, which in 2008 changed life for everyone—consumers and software developers—and put the iPhone into the realm of ‘magical.’ No one in 1983 might have believed we would have within the palm of our hand one device that we use to send instant messages, pay bills, monitor heart rates, make movies and even find love. The iPhone paved the way for the current mega trend of streaming. “Well we’ll give you 30 seconds of this program for free, or we’ll give you 5 screenshots, or we’ll let you play with it for a day. And if you want to buy it, just type in your VISA number and you got it. I don’t know how we’re going to do it, but we need a [software] radio station,” Jobs said.

Finally Jobs looked further out into uses for artificial intelligence, including one that I found particularly intriguing. “I think as we look toward the next 50 to 100 years, if we really can come up with these machines that can capture an underlying spirit or an underlying set of principles, or an underlying way of looking at the world so that then when the next Aristotle comes around…if he carries around one these machines with him his whole life and types in all this stuff, then maybe someday after the person’s dead and gone we can ask this machine, ‘Hey, what would Aristotle have said…what about this?’ And that’s really exciting to me.”

We have a belief that technological progress and its impact are mostly unpredictable, and only clear in retrospect. But Kevin Kelly, the co-founder of Wired Magazine, wrote in his book The Inevitable that grand scale technologies are in fact predictable because they have an inherent direction. He uses the analogy of gravity. Imaginerain drops falling on a hill. Though we cannot predict the exact route of each droplet their general direction will inevitably be downward. Similarly, Kelly says, the Internet was inevitable, but Twitter was not. Or the phone was inevitable (due to electromagnetism), but the iPhone was not.

In other words, large technological advancements act as “nodes of progress” from which sparks of creative innovations flourish. Jobs was able to see the potential in the fundamental nodes such that he was able to take full advantage. The personal computer could certainly be seen as one of Kelly’s inevitable technologies, but the Macintosh was not inevitable—it can be considered a creative innovation that allowed for a new way to do a valued thing: Beautiful and easy computing.

So how can you as designers spot and harness future opportunities? Taking inspiration from Jobs and Kelly, you can look for current “nodes of progress” that will unlock a flourish of creativity. Machine learning, for example, is still in a primitive state. Its inevitable direction, however, will be to enhance the inner workings of every industry. Through machine learning our car will be able recognize our face and auto-start, our homes will nudge us towards healthier habits, and half of our interactions with machines will use our voice. These are not far-off predictions, either; each of these advancements is likely to become commonplace in the next two to three years. This is just the infancy of the new age of artificial intelligence, so the time is ripe to understand the potential in machine learning and create your own innovative sparks.

Machine learning is just one example, of course. There are plenty of other nodes of progress out there, and forward-thinking designers can benefit by investigating and thinking about the ones that interest them.